What is low carbon ferrochrome?

Low carbon ferrochrome is a ferrochrome with a carbon content below 0.25. Its raw materials are metallurgical materials such as silicon chromium alloy, chromite and lime. It is smelted by various smelting methods. 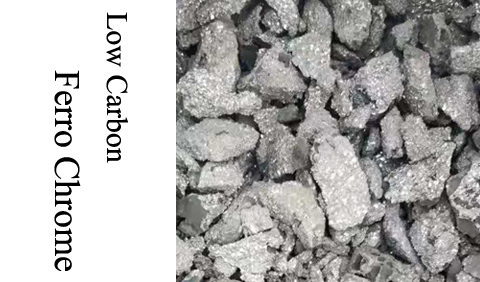 LC FeCr (Low Carbon Ferrochrome) can be used to regulate the ratio of Chromium in steel production without Carbon and other unwanted ingredients.

If chrome ore is used to refine low carbon ferrochrome, the slag in the refining furnace has a large viscosity and a high melting point. During the smelting process, the temperature must be very high. Therefore, the power consumption is high, the life of the lining is short, and the carbon content is not easily lowered.

If the use of oxygen to blow low-carbon ferrochrome has great advantages, there are many advantages, such as high productivity, low production cost, high recovery rate, etc.

In 1821, P. Berthier heated a mixture of charcoal, chromium oxide and iron oxide in a crucible to produce ferrochrome. This method has been used until 1857 when E.C. Fremy used Tasmania iron-chromium ore to smelt in a blast furnace to obtain Tasmanian pig iron containing 7% to 8% Cr.

In 1886, E.G. Odelstjerna described the use of electric furnaces in Sweden to produce 70% Cr high-carbon ferrochrome.

From 1906 to 1940, F.M.Becket and his collaborators carried out the process of producing low-carbon ferrochrome from silicon-reduced chrome ore. Tested and produced in a 500 kW single-phase two-electrode furnace (with a furnace output of 400 kg) to a 12,000 kW three-phase electric furnace (10 t of furnace output) to meet the needs of producing stainless steel.

Around 1920, the Swedish Trollehtan Ferroalloy Plant developed a three-step process for the production of low-carbon ferrochrome. That is, the electric silicon thermal method, also known as the Swedish method.

In 1949, H. Erasmus obtained a patent for the production of 0.01% low carbon ferrochrome by vacuum solid state decarburization. The Sim-plex Ferrochrome, called Simplicex, is produced at the United Carbide Corporation's Ma-rietta plant.

Wanhua is a professional ferroalloy manufacturer and supplier. It has been focused on the metallurgical industry for 20 years.

With its advanced management philosophy and the principle of good faith management, Wanhua Metal has passed ISO quality management system certification and is committed to the production and sales of high quality products.

A: Do you provide sample?

B:Yes, but the cost of freight is paid by you.

A: Do you have the product certificate?

A: Are you a factory?

B: Yes, we have three factories.

A: What is your main products?

A: What about your price?

B:We are factory, so our price is very low.

About low carbon ferrochrome, we promise the quality is very good. About us, we promise factory direct sale. There no middleman. We have rich experience, we are factory. So , if you have any need , please contact us !

Previous: semi ferrosilicon high carbon silicon the most trending thing now
Next: various grades of ferrosilicon and the effect of carbon on FeSi
SEND US INQUIRY
If you're interested in our products or have any questions, please kindly describe your requirement in detail. Our professional team will reply to you as soon as possible.
Related Posts
Product List
Latest Posts More+
SEND US INQUIRY
Anyang Wanhua Metal Material Co.,Ltd All Rights Reserved.